„Thoughts about a friend“

Let me deliver a few words about the person we are saying farewell to on this occasion – a man of humanistic culture with a multitude of skills and talents, full of alertness and energy, a master of the keys on the piano and the organ, a great mind in music notation – be it in orchestral scores or arrangements for the small band –, a tightrope walker between all musical genres, a tasteful analyser when absorbing the music happening around him, in a nutshell: a musical alpha animal.

I got to know Dieter during the Jazz Matinée concerts of the broadcasting corporation „Süddeutscher Rundfunk“, where he contributed original compositions as well as the arrangements of traditional German folk songs initiated in the course of this series. His trust in me lead to a first cooperation for the sound track of 3 episodes of the detective series „Ein Fall für Zwei“ starring Claus Theo Gärtner and Günter Strack. A type of music absolutely to my taste, being evocative of the great American examples. Our paths crossed again a couple of times during productions for publishing houses until Dieter finally established his own studio at Fleckenweinberg 21 in Stuttgart - DRM, Dieter Reith Musikproduktion. There, after the closing of my own studio, I was a frequent guest for various productions. Among others, there was a production for the publisher Theis-Musikverlag from which we are subsequently going to hear a tune composed by Dieter which was particularly important to him.

In the course of time, I learnt more about Dieter’s musical history.

Supported by his musical family he had started piano studies with Professor Kurt Herrmann and participated in the playing of classical and romantic chamber music in the family circle. However, strict discipline and order, his father’s principles of life, were not quite his cup of tea. In the evenings he would sneak out of the house to jam with the musicians playing in the “Katakombe”, a jazz club in post-war Mainz. Here they played the music he was going to continue pursuing ever more increasingly.

He was born too late for the big television shows involving the likes of Heinz Kiesling, Rolf-Hans Müller, Alfred Hause, Peter Thomas or Willy Berking. These jobs were taken, something he often regretted. Nevertheless, he found his place – always somewhere between art and commerce, never to one of the extremes, but always with heart and soul and total dedication.

Before I got to know him, he had already left his traces everywhere. Productions with SABA in Villingen-Schwenningen – for Hans-Georg Brunner-Schwer he played the heavy groove the latter loved so much. Early evening TV entertainment with Catherina Valente as well as jazzy productions with the Hammond B3. In 1974, a ground-breaking recording was made in Baden-Baden with the singer Bibi Johns: Kristallen den fina, a timelessly beautiful interpretation of Swedish folk songs with a mixed instrumentation – nowadays this would probably be called world music. Absolutely awesome in my opinion, however, was the television coverage of the preliminary decision for the Grand Prix d´ Eurovision in Munich 1983, a show which today goes under the name of „Eurovision Song Contest“. Back then it was a live broadcast with singers, band, choir and strings, perfectly orchestrated by Dieter – and congenially captured by the sound colleague Jörg Scheuermann, Bayerischer Rundfunk –, but it sounded like a studio production.

With no other musician have I been able to develop this feeling of conversance, a non-verbal understanding to this degree of intensity – this feeling as if two spirits had connected. Together with him I knew the certain sense of telling whether something was in good taste and harmonious or simply ever so slightly wrong. He would have become a good tonmeister … yes, if only he hadn’t had so many other great talents.

Dieter was so competent that you could put him anywhere and he would master the relevant task. But he never took a stand for or against something and thus was no figure of identification for the average consumer. Maybe his qualities could only be appreciated by those who worked closely with him.

For many years we visited the subscription concerts of the Stuttgart Radio Symphony Orchestra together, and maybe we were a little like the two old guys from the Muppet Show, sitting on their balcony and commenting snidely all the time. A legendary quote of his, during the entrance applause: now, now, do not praise prematurely, please. Prove yourselves first! Or the telephone conversations after the weekly episode of the crime series „Tatort“, naturally to talk about the, typically popular pedagogical, plot which has become increasingly abstruse in recent years, as well as to discuss the soundtrack, which sounds more and more as if it has been purchased in the supermarket on the corner. Mere playing back of software sequences. Who knew him also knew his (obviously tongue-in-cheek) judgement: I don’t know it, so it can’t be any good.

Who will now confirm or contradict my judgement of musical events? What will become of the conversations about anything and everything? With whom to discuss earthly bliss and anguish of mind?

Dieter, I will miss you.

Dieter’s Hammond B3 is now standing in the MPS Studio

Chris Reith, Dieter‘s widow, presents Friedhelm Schulz with Dieter‘s gold record for the composition / the arrangement of the entrance music of the 1972 olympic games, for it to find a worthy place in the MPS Studio Villingen/Schwenningen. Close to the organ.

And the new place where the B3 stands now. Right next to the Bösendorfer Imperial, on which Oscar Peterson long ago played his legendary SABA/MPS recordings. 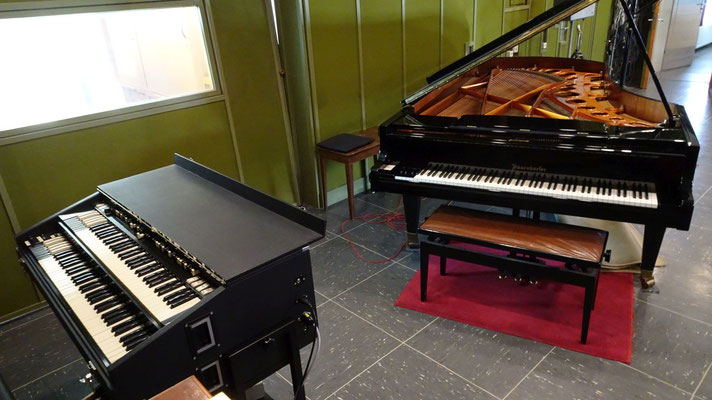 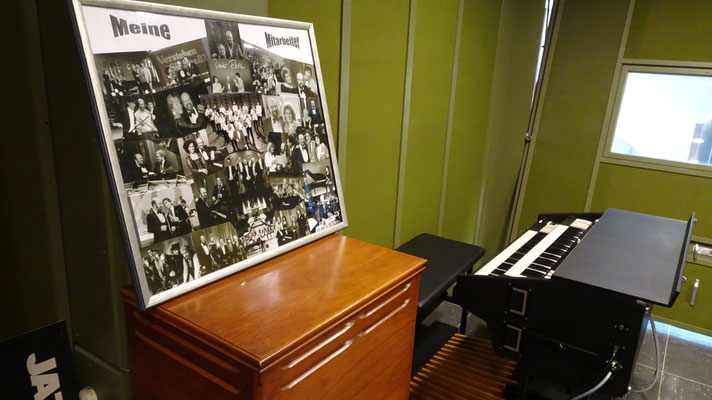