Control centre for the peripheral additionals is a YAMAHA console DM 2000. The array of 19“ equipment is arranged to ergonomical aspects. Access to them is according to star layout.

The room is acoustically treated for better results. JBL L90 driven by an ALESIS 300 power amp and EMES Black TV nearfield monitors supply a plain response and give a reliable control of the mix.

YAMAHA DM 2000, in a ZAOR Marea console, built by ZAOR studio furniture. External analog 19“ units are connected via MY8 AD/DA 96 converters. These cards have been modified from the hot ( +24dBu) YAMAHA level down to broadcast level 0 dB Fs = 15 dBu. The DM 2000 for me is a digital patchboard to access the analog path.

It is possible to use external processors as inserts or in the mix bus or in the mastering sum.

YAMAHA DM 2000 is connected to an audio computer running WIN 10 via RME RayDat card. DAW is Sequoia, because I benefit the fantastic and singular technical capabilities.

As I´  m used to work with a console I only need my DAW for recording/playback and editing tracks - plus embedding additional plugins. Mixing is done with the console. The DM 2000 not only offers an intuitive automation but a better haptic experience than working „in the box“.

Via another MY8 AD/DA 96 two SIEMENS W295b (passive equalizer units) into two SIEMENS U273b (compressor/limiter), packed into a „lunchbox" - well suited for tracks in need for „special treatment“, as i.e. vocal tracks.

Via a third MY8 AD/DA 96 there is access to Heikki Tikas valve compressors, replica of the famous Gates STA Level. It is possible to insert the Tube Equalizer Dual EQP 2 into the stereo sum as well as the Sknote CATENA - a switching matrix. With that I have access to VARIS Röhrenkompressor von HCL (Albert Sherbina). This an absolut singular control amplifier with adjustment of triode / pentode vari-mu (differnt behavior). Additionally switching is possible bewtween classic feedback regulation to the more aggressive feed forward operation. Bypass is controllable by a 75/150 Htz Bypass. Insertable over CATENA as well is a stereo unit of the NTP 179-400, a nearly unobtrusive brickwall limiter.

Also switchable is the dbx 160SL, a compressor that leaves nothing to be desired. With additional PEAK STOP, a limiter shutting down absolutely safe. As I don´  t want to win any „loudness war“, this is my first choice to get a musical sounding result. Counting by compression, this unit works better than the „QUANTUM“ from the same manufacturer.

Mobile Recordings are done with a DELL Lattitude and a RME Fireface UFX (8 (12) analog line and 4 (0) microfone inputs), extended by a Ferrofish A16 MKII  (16 analog line ins converted to 2 ADAT TosLink). When it comes to preamps there are 2 modified V672 in a 19" casing (built by me) as well as 2 TAB V376 and 6 Telefunken V 672 in an original equipment rack.

More micpres come with 2 SIEMENS V72 in a 19" casing (built by my friend Berthold) into a Symetrix 620 and into AES.

Additionally there is a RME Octamic with 8 inputs and a Mackie ONYX 800R with 8 inputs as well, connected via TosLink. This totally makes up to 30 mic inputs - sufficient for a live recording or a small production on location - no matter, whether rock/jazz, chambre music, folk music or a small orchestra. Samplerate up to 48kHz and 24bit.

The RME Fireface UFX is able to give a latency free headphone mix via the “analog“ TotalMix software – brilliant !

My collection of microphones:

In cooperation with Berthold Jüngst it is possible to work on a mobile truck.

This one came shell-proof packed from Tallinn, Estonia on September 16th, 2013 : tube equalizer dual EQP 2, a passive EQ based on inductors built to the specs of a Pultec EQ. Designed by Heikki Tikas with know how and going into detail to the original. The amplification making up for the loss of gain is a variation of the original circuit - not a SRPP - with russian NOS 6n6p triode tubes.

Yes, the Pultec built by Heikki ...

My experience - after some time working with it - goes like this:

... used old russian nos 1:1 as input transformers because sound - I did tests and they sounded better in this eq  than similar lundahls, edcors, teslas, eag and beyers ...

Definitely has some peatiness, a certain softness going to your ears. Straightforward basses following the given impact, "soft airyness" without blurring the signal and a transparent midrange. This cannot be achieved by a plug in, or at least not with one I know. The sonic result is very close to what I´  m used to from the SIEMENS W295. 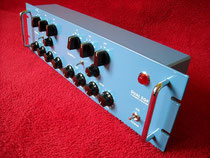 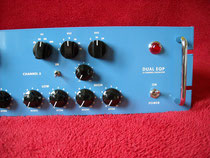 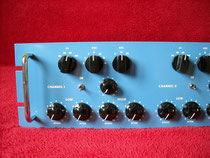 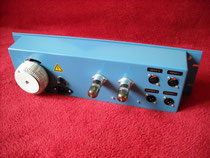 In use since December 2013, they are my next "objects of desire": 2 STA LEVEL replicas came shell-proof packed all the way from Tallinn, Estonia. After having used the VST pluggo of Sknote , I had the urgent need for the same thing in hardware. Heikki Tikas from Tallinn, Estonia is the man to offer them. He is constructing these analog beauties for an affordable price and vaunts them with his own words:

° Input gain adjuster is a stepped attenuator switch with 1% resistors

He sent some sound samples he had generated from the files I sent him. I was excited ! That´  s why I had to have these devices. For a special task I had 2 jazz guitars running over this gear. And the sound is just right as it is, without any further treatment.

The STA LEVEL shaped the american sound of popular music in the 50ies. Its "sound" is more concise and yet more sweet-tempered than a LA-2A, absolutely "in the face". Its sound quality is necessarily comparable to that of a Fairchild 670.

We´  re all in this world - in the 3 dimensions of our universe - children of the environment that formed us, apart from the genetic code that supplied us ( or not ) with pre-social competence. But leave us alone with philosophical discussion about controversial subjects.

Technical progress of radio transmisson, as originated in the run of the last 100 years, has significantly determined our expectation of the sound hitting our ears. Namely: we want to hear, what we are used to. Including the tonal balance of a tube compressor like the Gates STA LEVEL - who has his own standing side by side to a TAB U73a or a Fairchild 670. 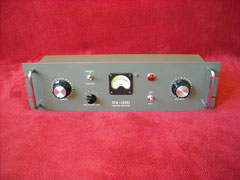 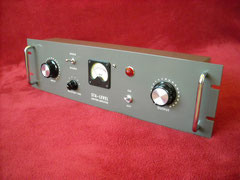 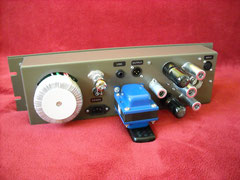 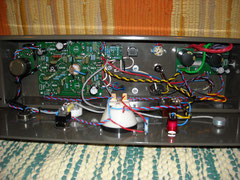 Since I had my YAMAHA AD/DA cards being modified to broadcast norm level (0dBFs = 15dBu), there´  s 9dB less send level and 9 dB more gain in return. If you want to have the STA LEVEL working like it should, there is too much level coming back - Heikki changed the level with his latest fabrication.

I´  m using two damping adapters in the return way. You will get those as -10dB and -20dB over EBay as well.

I owe it since November 2012:  HCL VARIS, a tube compressor of extraordinary performance.

In december 2012 I completed a broadcast mix of a  PUR-concert for SWR1 and mastered it with the HCL VARIS. Impact and transparency were overwhelming. Although (or because) the envelopes didn´  t look similar to a brush cut !!

Dieter Reith had me doing the remastering of a very special recording of 1972, suedish folk songs arranged by him, sung by  Bibi Johns and played by a bunch of fine musicians (i.a. Ack van Rooyen und Ronnie Stevenson).

"Kristallen den fina" is published by jpc and I  recommend it with the warmest suggestions, not only because of my own 2 pennies restoring it. It´  s a timeless and beautiful, congenial arranged and expertly orchestrated production. This music too benefits of the tonal output of the HCL VARIS. Listen to

Another recording I did was in 2013: mix and mastering of a duo sax/guitar, Tommi Horstmann und Wolfgang Lindenfelser. Beautiful music, and the HCL VARIS had it´  s part in enhancing the sound.

Project spring 2014 was mix and mastering of a live-recording of the Atlantic-Jazz-Trio (Garry Hagberg and Thomas Horstmann, Guitars as well as Peter Schönfeld, double bass) from 2009. Soundsweeteners of my sound workshop, namely the HCL Varis and the STA LEVEL for the authorized guitar sound are at work already in this mix. Listen to my recordings 1988 - ....

Mentioned at other places already is the recording of Pearl & the Jazzconsort, early summer 2014, one of those things, I want to do more often. Tonal highlight were the U47 replica for Pearls´   voice and Eberhard´  s saxophone. Mix completed with the help of the HCL VARIS and put on my homepage in recordings 1988 - ....

Another object of desire

Installed in my studio since Mai 2016. This LA-2A replica is built by stam-audio, a dutchman in Chile following original scheme and with top-quality parts... Cinemag transformator designed and wound to specs of the original UTC trannies. The photo electric cell by KENETEK is said to be closest to the original TB4 and there will be only NOS 12AX7, 12BH7 und 6AQ5tubes. My excitement has even grown since beginning of  Mai 2016, when the two LA-2A arrived. The sound is excellent, control process immaculate. Making thick without damping the sound !

thoughtfullness from the audio industry - and more ...

"This has to be the only industry in the world that has spent the last decades trying to effectively simulate all of the tools that it was told it needed to throw out."

what an effort, to bias an analog multitrack taperecorder. What were the costs of a 2inch 1000m tape and what about "just let it roll" ?

The process of artistic creation  cannot be trimmed to "democatic" rules. Whoever does not feel the greatness of art and has no respect for it, does not belong to the inner circle of art. Your own effort is the prior condition for a musical result. Whoever is only using technical aid will only be a con artist. But: the muse of music is a female being, a goddess. She demands absolute dedication, she doesn´  t accept any hide and seek.

Resistance is not futile. It is voltage devided by current..

"I don´  t think there is useful need for the wireless transmission I just  discovered ..."

"Music forces me to forget my true situation;  she is lifting me to another, more pleasant level; under the influence of music it seems I feel something, I don´  t really feel, I understand something that cannot be understood and I´  m capable of doing things, I can´  t do."

"I know that majority of men, familiar with problems of greatest complexity, ony seldom are able to accept the simple and plain truth, if it means to admit the falseness of their conclusions, that they have so delightedly declared to colleagues,
confidentially tought their students and thread by thread have woven into the texture of their lives."